What are the Stages of Evacuation? 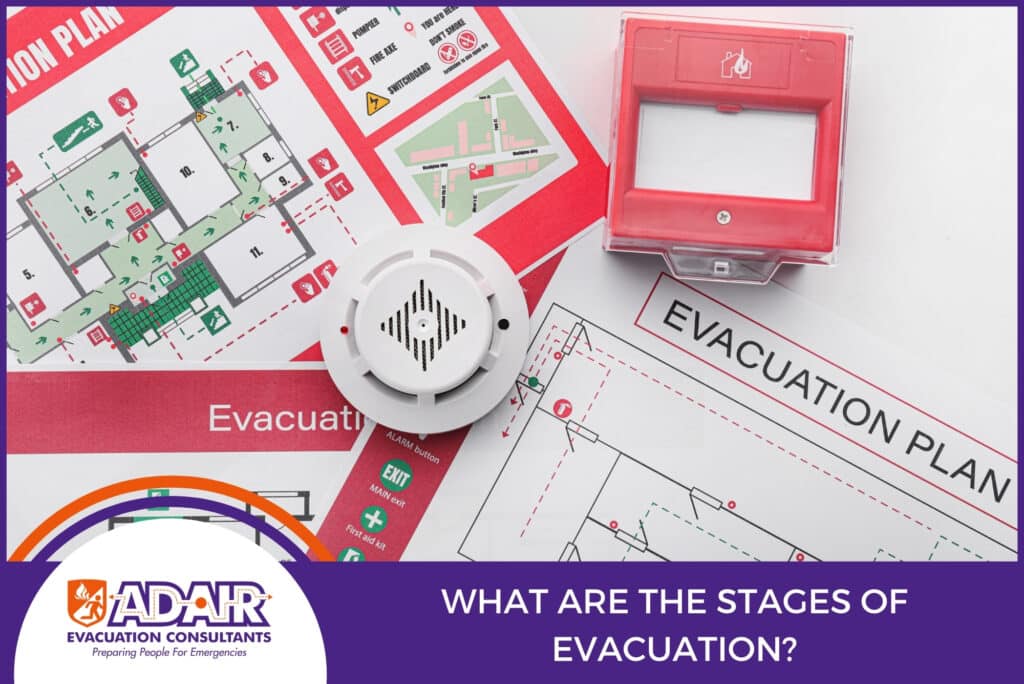 Evacuations do not always begin with a glaring alert to signal a disaster. When it comes to emergency preparedness, there are steps taken prior to the disaster that heavily affect a disaster’s impact on an institution and some of these include evacuation training and emergency planning.

Those in charge of facilitating evacuations in their own companies should know how evacuations work step-by-step. But of course, it isn’t easy to manage the disaster evacuation preparedness plan of their company alone. To make sure they’re doing things correctly, it is better to seek assistance from relevant stakeholders and other emergency planning committees in order to learn about and implement crucial evacuation stages.

The five stages of evacuation

An evacuation plan should be able to lay down the different arrangements and strategies involved in all stages of evacuation. It should also indicate who is in charge of carrying out the tasks during the evacuation itself. Here are the five stages of evacuation— from the decision to evacuate to the eventual return after the danger has passed:

The first stage of evacuation is making the actual decision to evacuate. This may seem like a simple “yes” or “no” question, but there’s actually a lot that goes into making this decision.

During this stage, it is crucial to know who has the authority to decide. It is also vital to create a standard that the point person can follow when making their decision. Here are the key steps in this stage of evacuation:

The decision to evacuate is a crucial stage in the evacuation process. If the point person deems evacuation unnecessary and personal damages occur, it can be a matter of life and death.

In this stage of evacuation, the goal is to effectively inform people that there’s an immediate threat and let them know the appropriate steps to take.

When sending out a warning, the persons assigned should immediately provide information to those who will be directly or indirectly affected by the incident. They should also let the people know what needs to be done, like when the actual evacuation will be, where they will go, and what path they should take to get there.

Since time is a luxury people can’t afford during an actual disaster, the warning process should be considered and communicated even before anything happens. People should know in advance what to do and where to go during the evacuation. Note that warnings should be prepared in advance to be effective.

Stage 3 – Withdrawal: Withdraw all stakeholders from the danger zone

As soon as the decision has been made and the warning has been released, it is important to withdraw the people from the danger zone as soon as it is safe. During the withdrawal process, it is necessary that people already have prior instructions on when they will evacuate, where they will evacuate to, and where they will pass through during the withdrawal process. Here are the key steps in this stage in evacuation:

During this stage, prior preparation and emergency training are critical. People in charge of evacuation should create maps and signs and do regular briefings and training to simulate this process before the actual disaster.

Stage 4 – Seeking shelter: Have a place where people can go after the disaster

After withdrawal, people will be directed to a temporary shelter. The process of shelter selection matters, as the number of evacuees each shelter can accommodate depends on the size and capacity of a shelter.

Stage 5 – Return: Return to the building after careful assessment

In this last stage of evacuation, the Appointed Person (after careful consideration) will decide whether or not it is safe to return to the building. Here are the key steps involved in making this decision:

Again, this is an important decision to make. For example, in cases like earthquakes when aftershocks can happen anytime, returning too early may not be the best decision to make. Careful assessment is necessary when deciding to return to a previous danger area or not.

Get started with your evacuation training at Adair Evacuation Consultants

There’s no question about the necessity of disaster-preparedness programs in any workplace. Those in charge of emergency training should make sure that their institution is equipped for disasters. This means that not only should companies have emergency equipment and signages, but they should also conduct emergency training for the workforce.

If you want to make sure that everything is done right, you can have an emergency consulting meeting with us at Adair Evacuation Consultants. We can review your existing process and tweak it to make it more effective. We can create systems that would reinforce your emergency information management system. We can also create training courses for clients.

Contact us now at 1300 213 000, fill in this contact form or send us an email to [email protected] and see what we can do to help you make your workplace safer for your people.

The EPAA and Fire Safety: What You Need to Know

Which Emergencies Require an Evacuation?

What are the Stages of Evacuation?